Home › News / Blog › Bobryshev On The Podium In The Czech Republic

Bobryshev On The Podium In The Czech Republic 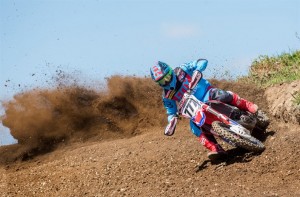 Team HRC’s Evgeny Bobryshev overcame his fear of the Loket track to take two second places and second position overall, and his second podium of the season on the #777 Honda CRF450RW.

His weekend was one of consistent pace: he took the holeshot in race one and set the fastest lap, before settling into a groove to finish second. Again in race two, he was second from the start, slipped to third but then came back strongly to finish second. In doing so, the Russian collected 44 World Championship points, his single highest haul of the season, and moves himself into fourth in the overall standings.

It looked set to be a double Team HRC podium too early on in the first race as Gautier Paulin moved himself into third and looked settled in the position. Unfortunately, the rest of his day was then blighted by a small crash in which he tweaked his knee, resulting in the Frenchman taking a pair of seventh place finishes.

Nevertheless, Paulin’s point this weekend move him into second in the World Championship standing, with five rounds remaining. The next race is the MXGP of Belgium at Lommel next weekend, 2 August.

“That was a top result for Bobby – a holeshot in the first race, fastest lap, and a pair of very consistent rides into second overall. The bike worked very well, he had good pace and rode two very good races, so we’re really pleased with that. On Gautier’s side, it was a little bit more difficult. He slid off in the first race and tweaked his knee a little which detuned him a bit, but he’ll be alright for Lommel. Really a pair of sevenths was good damage limitation for him. The guys have all worked really well, and it’s been a good day in the office.”

“To be honest I was a little scared of this track so I’m so happy it ended up like this on the podium. I’m happy I had two consistent races and kept it on two wheels because the track was tricky in both motos. We’re moving up in the championship but there are still five races to go so I still want to take it just race by race and get as many points as I can each time, and then for sure it’s possible to finish in the top three. I was a bit sad with my start from yesterday as it was really bad and it made it so difficult to come through. Today I changed a little bit my style and position and I was feeling much better. I’m really happy to get the holeshot in race one and race two I was in the top three, so it was really good. I’m really happy with this weekend.”

“Today was pretty tough and I’m not so happy. The starts we’re not so bad in both races, but I had a small crash in the first moto and went down. When I got back up I was seventh, and that’s where I finished. I had some pain in my knee, but it wasn’t so bad in the second race, I just didn’t have such a good feeling.”