Gajser on the podium with fantastic ride in Italy 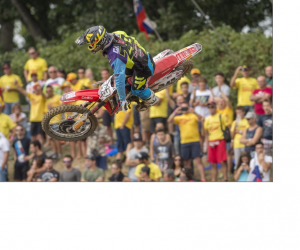 Tim Gajser rode to second overall in the sand of Mantova today with measure and composure worthy of a champion. Getting the better of the current championship leader Jonass in the second race, he maintained his gap to the lead of the World Championship of just four points with three Grands Prix remaining.

After yesterday’s disappointment in the qualifying race, Gajser faced a mountain to climb today from twelfth at the gate – similar to the starting position that yesterday saw him embroiled in a first corner crash.

However there was to be no such bad fortune today as the young Slovenian demonstrated maturity and level-headedness beyond his years. In race one he started strongly and jumped himself into fourth, quickly progressing to third and then second. Whilst pushing for the lead, a small mistake cost him second but he crossed the line third, collecting 20 championship points.

The start of race two was a little rougher and Tim emerged from the first corner scuffles in 11th. In one of his best rides of the season, on a track at which passing was very difficult, he fought relentlessly through the field, not putting a wheel wrong to take second at the flag and second overall.

Gajser knows he will be strong at the last two events of the season in Mexico, where he recorded his second career moto win last year, and the USA so the 2015 MX2 title looks set to go down to the wire.

“Tim rode very very well today. We thought that after yesterday it would be a very big challenge today, but he started strongly and came through the field well to save the weekend. I think his riding today shows just how much he was developed since last season, and that he would make a very worthy champion. Of course it is still very close and I think it will be decided only at the last race, but it gives me and everyone at the team great pleasure to see Tim riding like this.”

“Yesterday was really tough in qualifying with the crash at the start and then twice more, but today was very different and I am really happy. I made two solid starts around the top ten and we made some very nice passes. In the first race I was a little disappointed with the mistake from second as I saw the opportunity to pass Jonass there too, but even though the first corners of the second race were tough I am very happy with that race. We are just four points still from the lead, but Max is also closing so it will be an interesting last three rounds! Next we go to Assen so the third sand track in a row, but I think I am getting better on them now!”